Why did people decide to move west? 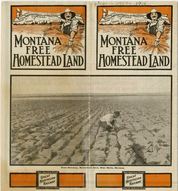 http://www.mansfieldct.gov/images/ 0MMS_Images/moulton_homestead_act.JPG
Families moved west were looking for a chance for a better life. The United States government promised free land to anyone who worked hard to farm the land. The pioneers wanted to own and farm their own land.

How did they travel? 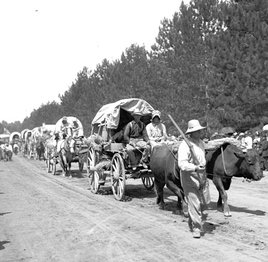 http://upload.wikimedia.org/wikipedia/commons/5/51/WagonTrn.jpg
Families usually traveled in covered wagons pulled by horses or oxen. Each wagon held one family and all of their belongings. Groups from the same hometown traveled together in wagon trains. It was safer to travel in a larger group.


They had breakfast of bacon, bread, and coffee before the sun came up. By 7:00 am, they were on their way. At noon, they stopped for lunch and a rest. Around 2:00 pm, they started moving again. They kept traveling until dinner time. Then they arranged the wagons in a circle or U-shape to sleep for the night. 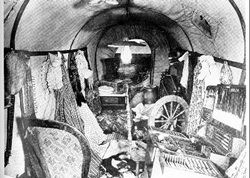 http://www.oregontrailcenter.org/images/HiRes/Inside-wagon-for-WEB-copy.jpg
The inside of the wagon was very crowded.  People had to think carefully about what they packed in the wagon.  They needed enough food and the right supplies for the trip, but if the wagon was too heavy, it would be hard for the animals to pull it.  The pioneers gave up most of their favorite personal items before they started the trip.


The inside of the wagon was not very comfortable to ride in because it was so full.  The ride was also bumpy because the wagon wheels were made of hard wood.  Most people walked next to the wagon - even the kids.

How long did the trip take?

http://idahoptv.org/productions/images/bts_wagonTrain.jpg
The trip west was long and slow. It could take as long as five months. If the weather was good, a wagon train would go about 12 to 20 miles in one day. If it was raining, they might only go a few miles.  There were also no bridges across the rivers, so they had to find the right places to walk through the water. Most pioneers started the trip in the spring so they could cross the tall Rocky Mountains when the weather was warm.

Was the trip dangerous? 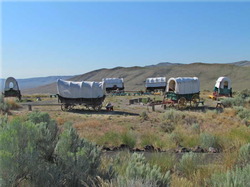 http://runnerduckreview.files.wordpress.com/2011/08/02-circle-the-wagons.jpg
The trip was dangerous. Many pioneers got sick during the journey because they did not have good food or clean water. The weather could be dangerous because the covered wagons did not protect them against strong storms. Pioneers also had to look out for wild animals, especially at night.